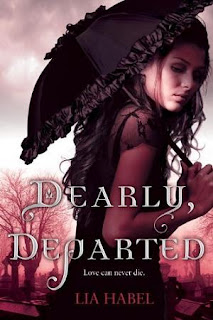 I was captured by the striking cover of this book so I requested it from Amazon Vine. Then I realized it was a zombie book so I opened it hesitantly as I haven't liked the few zombie books I've tried. However this one blew me away! It's a unique mashup of steampunk elements, zombie convergences, mystery, romance, and amazing world building.

Setting: New Victoria in 2195, living in a society that has reverted back to their idea of gentility and culture as epitomized by Victorian society in order to deal with the rebuilding of society after mass chaos and death. While the surface seems mostly calm, there's a secret roiling beneath the surface that the government is trying hard to repress. That secret is the existence of zombies, humans brought back to life for a limited period of time even as their bodies continue to decay. I'm not sure the steampunk elements were fully utilized but the world that was described fully captured my attention.

Characters: This novel is told in five alternating perspectives, which was a little much for me; not sure if they were all necessary. I'm not going to share two of them because it might spoil you but I will describe three of them. First is Nora Dearly, who I felt was the main character. She is newly orphaned and ends up kidnapped by a squad of zombies. Among those zombies is Bram, about two years undead but still in possession of most of his dignity and brain. Their star-crossed love forms a subplot. While I loved them becoming friends and hanging out, I can't really support a relationship between someone living and someone dead (this is why I don't support vampire romances either).  This is especially heartbreaking because zombies only reanimate for a couple of years so the clock is ticking on them.

A third character is Nora's best friend Pam, who originally doesn't seem like much but demonstrates tremendous strength of character as the zombies get out of hand. I think she ended up being my favorite character especially because I couldn't get behind the love story. I loved how kick-ass Pam was and how she didn't crumble despite having many reasons to do so.

Plot: I really don't want to give too much away but I felt like the plot moved at a decent pace and a lot happens over the many pages of this book. Admittedly some probably could have been cut such as the two perspectives I didn't describe but I was mostly absorbed and enthralled by this unique book.

Overall: A great introduction to a promising new series; there's so much in this book that I didn't touch on in this review so all I can say is go read!