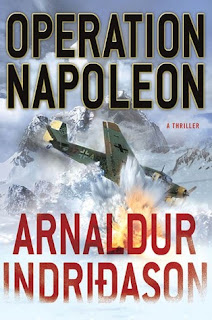 Source: Received an ARC through Amazon's Vine program in exchange for an honest review.

This book was definitely me going out of my comfort zone. First it's a translation from Icelandic; second it's an adult book; and third it's a thriller. I don't read many of those! But after seeing Captain America, I was kind of primed for some WWII suspense so I took a chance.

I mostly ended up enjoying this. The characters didn't have a great deal of depth, being defined largely by one or two traits but I'm not sure I usually expect more in my thrillers. For one-offs, as I think this is, I want to be on the edge of my seat watching people narrowly escape dangerous and reading about things blowing up. The characters don't have to engage my sympathy or even much of my interest for me to be able to enjoy the book.  It's good that I wasn't very attached as several of the characters were casually dispatched by other characters in chilling scenes of murder.  There was no hesitation; just boom! Dead.

I thought it succeeded as a thriller because I was very much on the edge of my seat trying to piece together the puzzle of what is Operation Napoleon? However I'm still not entirely sure I understand it; whether that's the nature of the book or of the translate or possibly even my own slowness, I don't know. I would have preferred more answers.

Something that was very unique to me was that the villains were the Americans, who apparently have a very complicated relationship with the people of Iceland.  On the one hand, their military base pumps a lot of money into Iceland's economy; on the other hand, they are overbearing, arrogant, and rude, bossing around top Icelandic government personnel in order to pursue their own agenda. No wonder they're not popular.

Overall: A fine thriller with exciting scenes and a daring main character who manages to evade a lot of threats.