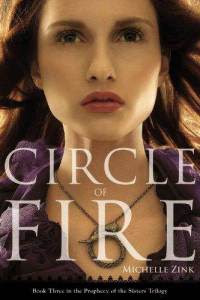 As the conclusion to the Prophecy of the Sisters trilogy, I approached this book with trepidation. On the one hand, I adored the first book Prophecy of the Sisters; it was one of the first books I reviewed on my blog and I had nearly complete praise for the book. But then I read the second book, Guardian of the Gate and was dismayed, mainly because of a blah new love interest and the feeling that this second book was useless filler.  Thus my excitement for book three was tempered with the knowledge that the aforementioned love interest continues to appear as the love interest even as I wanted to see the conclusion of this battle royale between sisters.

I'll start with what I liked, which was the relationship of the sisters. Lia and Alice are still committed to their respective causes and there is much more of Alice than in Guardian of the Gate.  I enjoyed their sparring the most. They also bring up important questions about the nature of good and evil as well as insights into the sister-sister relationship as well as interactions with the parental units.  Another aspect I liked was Lia's friendship with the four Keys. Each is different and some are more fleshed out than others but I liked that part.

I also mostly enjoyed the journeys although again it all reminded me of the Lord of the Rings films. Now I love those films but I wish it hadn't evoked them so strongly. Maybe that's just me being super weird though?

Now on to what I didn't like...it may be a longer list but it mostly stems from disappointment. I loved the first book but found the rest of the trilogy to be lacking in multiple areas.

First, I didn't have this problem with the earlier books but I felt like the writing was more formal and awkward. I understand that historical fiction aspires to be different from the more casual contemporary style but it was jarring in this particular book.

Second was Lia herself. She seemed to flip-flop in some ways. She'd say that her power was growing and she had a better grasp on her abilities but then she'd turn around and say that her power was weakening and they had to attempt to break the curse at the first attempt. Which was it? Was she strong and powerful or dying? In general it seemed to be the latter, but it was not consistent and it annoyed me.

Then there's Dimitri, who was introduced in the second book and who I had thought might be a spy/traitor. Something about him just didn't sit right with me and I felt safe reserving judgment. However he is in this book again as the Lia's love interest and I still hated him. On the one hand, he's not really a jerk, which is always great to see in YA lit; it's kind of scary how much non-jerky boys are missing. However he seemed too perfect and I was never able to shake my suspicions. If you like Dimitri, you will probably enjoy their love scenes as they are definitely more adult but I hated them. What was the point in making me like James if Zink was just going to shove him aside?!

A question for readers of the trilogy: What would have happened had Lia or Alice committed suicide or just died young? When their mother died, the curse passed to these girls. But neither has had twin daughters yet. From one line in the book, I think the curse would pause until a new family was chosen but I am unsure. Do you have any theories?

So Overall: Mixed feelings. I don't feel like the rest of the trilogy lived up to the promise of the first book. However I would still recommend it, with caveats, to people looking for a different kind of paranormal and who can appreciate historical elements.

Cover: So I really loved the original cover of the first book and have been much less impressed with these covers; definitely preferred the turned face for book 2 over the head-on shot of this book.