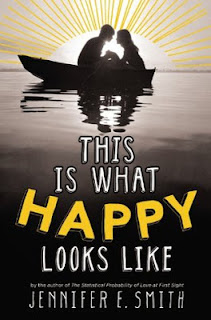 My big impression of Jennifer E Smith's well-received previous book The Statistical Probability of Love at First Sight was that it was unbelievably emotionally devastating to me and completely unexpected. I was thus wary to give her plots another chance although I read some reviews that seemed to promise that this was a lighter read and owed a debt to some classic romantic comedies, my favorite genre of movie so I decided to give it a shot once my library bought it. I was also promised emails and I'm a total sucker for epistolary novels although the emails taper off after the opening chapters.

Well, this did not destroy me but instead it didn't elicit much of any kind of feeling beyond frustration. The beginning was super cute with email exchanges starting when one person inputs the wrong email address, asking his friend to watch his pig but instead meeting someone new. That new person is ordinary girl Ellie living in Maine while the pig owner is Graham, one of the biggest movie stars who gets the set of his new film to be in her small-town in Maine specifically so they can meet. This all happens pretty fast (much faster than I expected) and soon the book focuses more on her concerns about privacy given her past and his continual struggle to grapple with the privileges and responsibilities of celebrity.

I am a huge fan of celebrity gossip and loved viewing Graham's life through that prism although this book doesn't delve too deeply into the practicalities of the life of celebrity. Privacy is a big concern though and what you can keep to yourself and when you need to share or how you can frame events in a certain light to convey a particular perspective. So I guess I thought there were some interesting themes.

Less interesting to me was main character Ellie whose friendship with Quinn is splintered pretty early on and not repaired for most of the book in scenes that drove me crazy. I feel like I've read quite a few YA books this year where the best friendship is fractured in some way and I hate it-I know YA friendship isn't always as valued as romance but it matters to me and it's something I try to point out in my reviews. I really wanted Ellie to take more agency and fix that relationship far earlier despite stating that it could only be fixed once Quinn had come around to wanting to fix it too.

As for the romance, which of course must be mentioned, it just didn't do much for me. Ellie and Graham are perfectly fine people. I got the impression that they did have a connection but as the reader, I wasn't that excited about them. It was enough to sustain me while reading the book but after a few days, I just feel completely lackluster about them.

Overall: A cute enough contemporary but not an outstanding representation of the genre.

Other Opinions: Since this book has been out for a while, I had a ton of reviews; here are just a few from my blogging friends
Beauty and the Bookshelf
Candace's Book Blog
Consumed by Books
Jen Ryland/YA Romantics
Michelle and Leslie's Book Picks