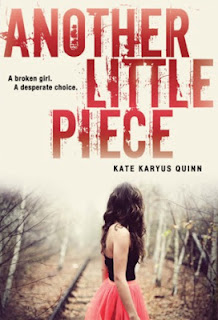 Source: Received an e-ARC through the publisher at Edelweiss in exchange for an honest review.

The blurb for this book teased Pretty Little Liars, a series I've never read but I am a fan of the show (I think the cover model brings to mind Spencer) and became interested in trying this book despite also noting the promise of horror, my least favorite genre.

Well, I'm glad I gave this a shot as I found it refreshingly dark and unique although I was right to be wary of the horror aspects, which are quite gruesome although not unmanageable. This story is twisty covering years as it follows a main character plagued with memory problems and a serious disconnect from the people she should know best. As the story unfolds, she discovers just how far people are willing to go for love or revenge and what price they have to pay to exact them.

I did have trouble slipping into the book, which opens with Anneliese Rose Gordon appearing thousands of miles away from where she disappeared a year ago. But she is not Anneliese despite her appearance and visions only encourage her to investigate what the real story might be. What she uncovers is a cycle of violence and selfishness and destruction that she *might* be able to end if she can only find the strength.

For much of the book, I felt a certain level of disconnect to this book, partly because of Anneliese's own disconnect. She knows that is not her life and can barely stand to be around the parents of Anneliese although they all try. She knows she doesn't belong and is uncomfortable and that transferred to me as well. Her confusion also wore off on me although we eventually figured things out, I think. A lot of pieces of information are slowly unraveled and the way it all ties together is very impressive.

This book is definitely not for everyone but those who loved it, really loved it and it is a very welcome addition to YA horror so I would encourage you to carefully consider giving it a shot.

Content warning: Language, drugs, and sexual situations abound in addition to violence so if you're sensitive to any of those, I would advise you to investigate further and proceed with caution.