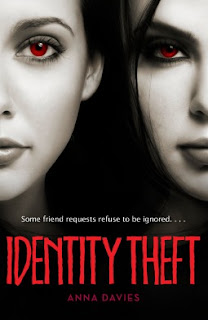 I don't tend to read much horror being a huge wimp but I liked that the premise for this book mentioned sisters, a soft spot for me. I also liked that the one sister was an overachiever bent on an ambitious goal for college, something I always admire. So I decided to give it a shot.

Honestly I did not find this book that thrilling. There was the brittle Hayley who has forsaken everything in pursuit of her academic goal (including sport, boys, and friends) and maintains her discipline behind a humorless disposition. Until pictures of her on social networking sites partying start popping up and it becomes clear to Hayley that someone is trying to ruin her life. Further research reveals that it is her previously unknown twin sister and she wants to take over Hayley's life no matter the cost.

Man, I thought I could connect with a girl who is into academia but I just could not get behind Hayley. Her rigidity drove me crazy. I mean, I loved school and studying but it cannot be all that one does. Another reason I may not have liked her is that there's this cute boy who obviously likes her but who she ignores as competition while fawning over a guy with whom she has very little in common. Her mother's presence is limited despite ostensibly being an important part in bringing the twin girls into the world and I found the logic behind their separation...odd and difficult to swallow.

What I did like was the chilling premise around one's online presence. Although I tend to think of it more in terms of what you're doing being captured online and potentially haunting your future rather than someone maliciously attacking you, I know that's also a possibility. It really made me think about I do online (I try to keep my blog somewhat low-key and not too detailed about my personal life but if someone wanted to go after me, I don't know how I could stop it.)

Overall: I was not impressed-the story wasn't very strong nor was it thrilling. This might be better for fans of 80s teen horror novels but I was never much of a fan.

Cover: Suitably creepy with red eyes that aren't really relevant to the book.