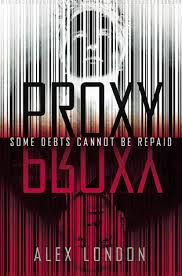 This book was sent to me for possible review by the publisher and I entered it with very little expectations. It hadn't been much on my radar probably because it is darker, more action-packed, and less romantic than my typical read. Regardless I still quite enjoyed myself.

In the future, wealthy Patrons can do whatever they want but someone always pays. That someone is a Proxy, owing a blood debt from childhood that they may never be able to repay. Knox and Sydney have been entwined like that for years. When Knox crashes a car and kills his passenger, he sentences Sydney to a lifetime of servitude. But there are still a few tricks up his sleeve and Sydney ends up taking Knox hostage as they run for their lives, looking for a jubilee, a way to crash the system and forgive all debts, upending the entire system.

First I wanted to mention that Sydney's name is Sydney Carton as Proxies draw their names from old literature. If you've read A Tale of Two Cities, this name is so appropriate and once I made that connection, I pretty much squealed with glee. I'm not really sure how I feel about him-Syd is an okay guy whose brains I admired but who I wasn't as warm and fuzzy about as I have been for other MCs. I do know how I feel about Knox though; I hated him. He is such a selfish jerk. Luckily over the course of the novel, Knox grows up a little and becomes almost tolerable. There are quite a few other characters but I don't want to go in to them for fear of spoilers.

As for the plot, I love the idea of a futuristic story about a whipping boy who could end society as they know it by invoking an event from Old Testament times. That's just such a cool plot line to me. This book was almost non-stop action with every chapter spurring you on to the next one until you finished it. The book ends pretty abruptly but I found it satisfying. This is the beginning of a trilogy so rest assured that your lingering questions should be answered in books to come.

Content: There is a lot of violence and drug use-I don't remember there being any language.

Overall: I liked this one and thought it was pretty cool but I'm not in love with it or anything. Craving more dystopia? Love lots of action? Give this one a try.