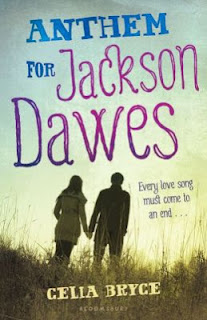 I think this book called to me because of its genre: contemporary aka my favorite genre! I assume I knew it featured a protagnoist with cancer when I requested the title as it says so in the synopsis and I had read a few other reviews but when I opened the book, I found that a bit unclear at first although it is soon emphatically clear.

For me, the big failing for this book was my inability to form a connection to any of the characters. You might think that main character and narrator Megan would have clicked with me somehow. Or surely the titular Jackson Dawes tugged on my heartstrings? Or any one of the hospital staff, her family, or her friends? Nope; I didn't hate any of the characters but I felt disconnected to all of them. Compounding that was my feeling that the story itself was very disjointed with scene lurching to next scene instead of smoothly flowing. Other reviews have mentioned this jumping so I know I'm not alone in feeling that.

I did think there were some great descriptions in this book and feelings were well captured. Some examples were Megan's conversations with her grandfather, when she realizes her hair is falling out and gets wigs to replace it, and her realization of the great divide between her shallow friends and herself now. That last one did really get to me and I enjoyed the way the friendships played out from that point.

Overall: This is a fine book-it's just not one I can get excited about. People who are craving contemporary or a quieter story may find more to enjoy; I think it might lean even toward literary fiction, which is not something I tend to appreciate.