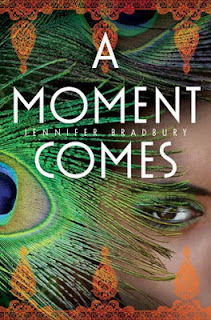 After taking some classes on Indian history, I discovered that I have a deep fascination for the country and its history that is not often sated in YA fiction, which so often focuses on American or fantastical worlds. Luckily we have books like this, a more serious offering from the author of Wrapped, the historical MG/YA.

What first caught me about this book is its setting during the partition of India and Pakistan in 1947, a situation whose repercussions are still felt today in seemingly unending conflict between the two bodies. I knew vague factoids about the situation but this story places you on the ground with Sikhs and Muslims battling over territory but also thankfully highlights the good of people stepping up to do the bit of good that they can do. This is demonstrated in the form of our three narrators: Muslim Tariq, craving to study at Oxford; Sikh Anupreet, a beautiful girl confined to her home to protect her from the violent angry men around her; and Margaret, the British daughter of a cartographer come to divide India who meets the previous two when they are hired as servants in her family's household.

I did not read the summary very closely as it clearly states that these three would be followed so I was surprised to meet the three as narrators. Each chapter lists the narrator so it is easy to keep track that way although the personalities, wants, and desires of all three are so different that it would be simple to do even without (it is appreciated still.)

Probably what I liked most about this was how everything kept building. The circumstances became darker and more violent, everyone became a bit more desperate until the great climax of these ordinary people stepping up to do what they could despite the odds. In the author's note, Bradbury writes a little about this and I loved how she brought that theme out.

I do think there could have been a bit more depth into the religious, racial, and gender issues of the time, especially for people who are not familiar with the period. Still there are a few books to reference mentioned in the author's note that I think it would behoove me to check out so as to further enlighten myself.

Overall: A very well-done historical novel about a time not very well-known to modern American audiences.