Peregrine Harker and the Black Death 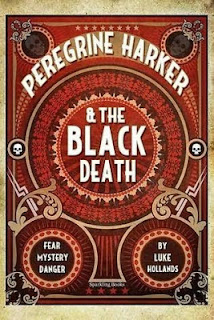 I'm not entirely sure what attracted me to this book but I thought it sounded like an exciting adventure story and that sure was the case! This book isn't very heavy on characterization or world building but every chapter ends with suspense, propelling you forward to the next one, much like the penny dreadfuls that are the preferred reading material of the titular character.

Peregrine Harker is a Victorian London orphan whose head is easily turned by the fearsome mysterious dangerous adventures of fiction, something that hinders his ability to truthfully report at the newspaper. His last chance is to investigate the disappearance of tea on its journey from India to England. Although the assignment seems straightforward, it is actually a tangle of conspiracies that may send Peregrine to his death.

As I said, this book is very heavy on plot and adventure, which will appeal to some readers but was not what I wanted. Although the title "Black Death" may imply the plague to some of you, it actually has a different meaning, which is promptly revealed. I wish it had had more to do with that as I find the time period absolutely fascinating but the Victorian era has its moments too especially when exploring new kinds of technology.

My big wish for this book would be for the characters to have some more depth. Instead it was all very surface level as Peregrine frantically moved from place to place, trying to track down the evildoers. He meets a host of people, some good, some with evil intentions but they are also very shallowly drawn.

Overall: I think this will be a fun read for some younger readers but I don't see it having much appeal to older readers.