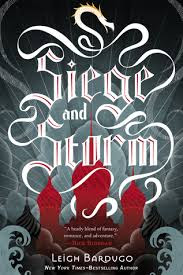 When I was choosing a book to read on the plane for my vacation, I thought Siege and Storm would be the perfect pick. Highly anticipated and already receiving rave reviews from the blogosphere. But when I tried reading it on the plane, I was confronted with the fact that this is a fantasy and I really struggled to concentrate on the world, eventually putting it aside until I landed where I promptly devoured it.

I can't share too much about the plot but I will remind you how Alina has an amplifier and is on the run from the Darkling in the company of Mal. This book picks up with them still on the move and quickly escalates from there. No moments of piece for the young couple but new and ever more difficult challenges keep arising, both external and internal.

Although Shadow and Bone received a decidedly meh review from me, the more reviews I read around the blogosphere and the more I mused on the book, the more excited about it I became. Now that I have completed Siege and Storm, I still have similar feelings. There is just something about this series that fails to captivate me like my favorite books do.

Yes, there are some great moments like the introduction of Sturmhond, a privateer with charm to spare who is quite the trickster. Every moment with him sparkles although his flirtation with Alina pissed off the Mal fan in me. Speaking of Mal, he is kind of a gloomy Gus in this book as he feels increasingly stifled by the decisions he and Alina have made and how that limits his future. I just wanted him to give his all to Alina but then I guess he wouldn't have been the kind of guy he is. As someone who quite liked the Darkling despite a long-time dislike of the "bad boy," I was disappointed that he didn't have more page time. When he's there, he's there-he takes over everything and he's always in the background of Alina's thoughts but he didn't have the presence he did last time.

And then we come to Alina who is probably my biggest problem with the book. I just don't click with her. There's nothing particularly objectionable about her to me but we don't have the easy camaraderie that I've had with other heroines (say Alanna of Tamora Pierce's series). It's as simple as that.

Overall: I would still definitely say this is a must-read for fantasy fans and those who enjoyed the first book; it's also a good read for people who want to stay abreast of what's popular in the YA category as these books have inspired a lot of love.