City of a Thousand Dolls 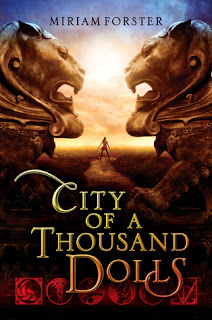 City of a Thousand Dolls by Miriam Forster
4/5 stars
HarperTeen, 2013
361 pages
YA Fantasy

The early reviews I saw of this seemed to be less than positive but I was so enchanted by the cover that I decided to check it out anyway. I'm glad I did as I found myself absolutely swept away, finishing it off in one day mostly under the beautiful sunshine (no surprise that the publisher is HarperTeen whose books are kind of my crack).

Nisha is an orphan, living in a city of unwanted girls who are trained from birth in certain arts, the better to secure a husband or patron. She is unique, having arrived not as an infant but as a child and has stayed on as a messenger/rat for the Matron receiving training from the various houses including fighting and music. When she stumbles across the dead bodies of several of the girls, Nisha ends up being the only one willing and able to investigate their murders and fight for justice.

I've got to give a hand to Nisha for her passion and critical thinking. Through her investigation she stumbles across many thing that are wrong and she is outraged by them. She doesn't just stand aside and think there's nothing to be done but she presses on with her work until an opportune moment.

Another positive was the relative lack of romance. Though Nisha does get to kiss a cute boy, he is nowhere near the only thing on her mind and her goals are far more expansive than just being with him forever and ever.

A third positive (and the one you might be most interested in knowing about) is the talking cats. Yes, there are cats who can communicated with humans but they are few although obviously Nisha is one of those. These cats prowl the city and seem to look out for her for some reason. They have many secrets that Nisha unravels as she seeks a murderer.

As I wrote this review, I realized that I don't have much of substance to say.  I enjoyed reading it, I'll probably check out the second book but nothing in particular stuck out to me as overwhelmingly good or infuriatingly bad.

I think if you tend to like the books from Harper imprints, this might work for you. It's also good for lovers of fantasy and cats.