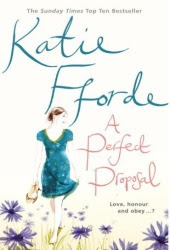 I've seen Fforde's name a ton since she was always shelved next to my beloved Jasper Fforde but for some reason I never picked up one of her books (no, I don't know why...it's a mystery never fully explained). However it did mean that this was the perfect opportunity to pick up her book and I was utterly charmed. I didn't really know what to expect but I was absolutely swept away.

My one quibble about this book was the significant age difference between the love interests, which is mentioned several times as a negative or at least not the best situation but is not really something they discuss. I think that Sophie is certainly on the more mature side for her youthful age (something I empathized with as I have had several people recently tell me that I'm very mature-I don't really know what to do with that as I think I am exactly as I should be but always with room for improvement) and I fully believe in the HEA but I think that could have been hashed out more.

The rest of the book was great though. The genre would probably be "chicklit" as it focuses on a young woman, struggling to figure out her career, love, and life in general while also dealing with familial pressures and friendship travails. In this instance, Sophie is the youngest in a family of intellectuals and has forgone acquiring a degree, pursuing something more practical like design so that she could go into business for herself. Although her family is happy to enjoy her skills, they also constantly deride them to her face. Thus Sophie leaps at the chance to travel to America where she meets an elderly woman and sparks with that woman's grandson.

Sophie is rather passive at the start, allowing her family to run roughshod over her but she grows more of a spine through her experiences. There are many funny moments as well as sweet and sexy times. This was a great introduction to Fforde's writing and I am eager to read more of her fairly extensive backlist.

Recommended for when you need a light, humorous romantic read, perhaps in between some darker denser material :)