You Know What You Have to Do 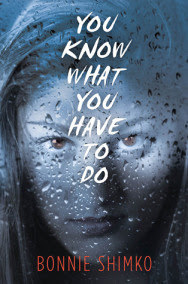 You Know What You Have to Do by Bonnie Shimko
3/5 stars
Amazon Children's Publishing, 2013
230 pages
YA Contemporary Thriller

Mary Magdalene or Maggie was saddled with quite the name by her young mother but has managed to grow up relatively normal. Oh, except for the voice in her head that tells her to kill people. Sometimes those people are the abusive alcoholic father of her friend; sometimes the voice singles out innocent little babies though. As Maggie's fear of this voice grows, will she be able to resist the darkness it shouts? Spoilers are necessarily contained as I need to explain exactly how this book affected me.

Firstly the characters didn't do much for me. My understanding was that Maggie would be a quirky original voice but I found her somewhat annoying. I hated all her complaining about her mother and best friend, the former of whom didn't seem that bad although the latter's true colors are revealed later. For one thing, Maggie is almost raped in a movie theater by a boy she liked and trusted. When she tells her friend, she says it was Maggie's fault and she should call and apologize! In fact Maggie complains a lot, which does ring true from my memories of being a teenager but is not what I like to read.

For me the ending of this book though was really where my problems came out though. She NEVER tells anyone about the voice and in fact seems to be embracing its instructions to mete out vigilante justice. I am never a fan of vigilantism and found this conclusion very unsettling. Despite meeting with many psychiatric professionals, she does not want to be deemed crazy and thus holds her tongue. I think she needed help and wish the good work of the doctors could have been appreciated.

Not everything I say is negative. I did find the writing pleasant enough and I don't think I've read another YA book quite like this one. Just overall, I feel like this was not a successful outing for me.