ARC Review: 15 Days Without a Head 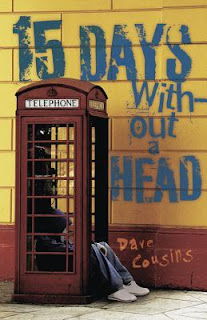 15 Days Without a Head by Dave Cousins
4/5 stars
Flux Books, 2013
Originally published by Oxford University Press, 2011
310 pages
YA Contemporary
Scheduled to release May 8

Not entirely sure how this one got on my radar but I must have realized that it was a contemporary set in England from the male perspective, all good things to me. So I picked it up and read it quite quickly.

There are a lot of heartbreaking moments contained in these pages but thankfully also moments of hope to balance the darkness. See, Laurence is a fifteen-year-old who is essentially the responsible adult in his family taking care of his six-year-old brother because his alcoholic mother is incapable. He is trying to hold them together but it's so hard as nosy neighbors insert themselves while friends prove themselves in surprising ways. As a subplot, there is Laurence's quest to win the family a vacation from a radio show by pretending to be his own (deceased) father.

So many times, I wasn't sure I'd be able to continue with this book because it was just so hard to read about Laurence's situation. His father and grandmother are dead, his mother has abdicated responsibility, and there is no place to turn for help unless Laurence wants to be separated from his beloved brother. How do you cope? What do you do? Laurence keeps pressing onward, somehow, in a novel that manages to deftly balance the tragic and the comic (for example, the younger brother sometimes behaves as if he was Scooby-Doo).

I think my favorite part was when Laurence makes friends with Mina who steps up in a big way to help out his family. When he realizes he has someone he can trust and rely on, it's a big moment for  him.  Finally he has someone to listen and try to understand his situation without passing judgment. The mother was a difficult character to follow because of her alcoholism. I always want there to be good parents in YA but there's a very clear reason why she is unable to fulfill that role.

Overall: A very well-written issue novel that should appeal to fans of YA contemporary and Anglophiles.

Other Opinions:
Book Angel Booktopia
Rather Be Reading