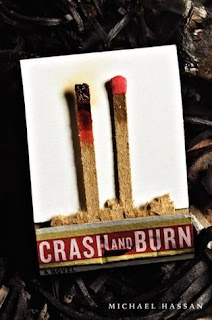 My rating has an asterisk next to it because while this is personally not my kind of book, I think the quality of its writing and what it tackles is very impressive. I didn't like it because of the content and the characters. We're talking profuse cursing, drugs, and sexual language and activities. If I provided an excerpt in my reviews, I'm not sure I would be able to share one that was suited for all ages. As for the characters, I never really warmed up to Crash. I thought he was a lazy selfish jerk and though I sympatheized with him over his even worse father and the problems caused by his ADHD, I did not like him. Still I think this book is quite majestic.

The plot centers around Crash (full name Steven Crashinsky) and Burn (full name David Burnett) whose lives have overlapped and intersected from elementary school up to high school when Burn brings guns and bombs to school and Crash stops him, saving more than a thousand people. But to get the full story of how Crash halted him, you need the full story of all those years.

I thought the themes explored were fascinating and when Crash and Burn were interacting, I was gripped. But then there are the moments when Crash was crudely discussing women and what he could get from them or when he was high (and he's high an awful lot) and I just wanted to shake him. I'm pretty clean-cut so while I recognize that these elements come from real-life, they're very far from my real-life (and that's how I like it).

My big lingering question from this book though is about the audience. I know there are a lot of bookish people like me who don't like that kind of content and will possibly pass over the book because of that. I found the voice compelling but I couldn't recommend it to anyone who might be offended by the contents (and that encompasses many of the people to whom I usually recommend books). And I'm sure there are also a lot of people who could empathize with Crash but those people aren't going to pick up a 500+ page book (Crash sure wouldn't).  So who exactly is the audience?

Overall: Again I do want to stress that I think this book is an impressive accomplishment; it's just not the kind of book that really speaks to me.

Other Opinions:
A Girl, A Boy, and a Blog
Enjoy a Book
Stacked