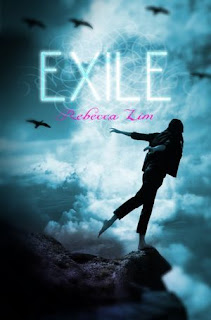 In 2011, I picked up a random book from Netgalley and was blown away by its enthralling story that kept me on the edge of my seat. That book of course was Mercy in its American release (originally from Australia). Naturally I eagerly awaited the release of the rest of the books in the series and we finally reach book 2 with the pending release of Exile.

Although it has been two years, I still anticipated this sequel and loving it as much. Did I think it would matter that I didn't remember that much from book one? No, because it was fairly self-contained and not much was revealed about the overarching story mythology. That is what I figured book two would divulge.

And Exile does follow through on that promise, revealing more about Mercy's past as some kind of angel although the specifics are still murky. In fact, I feel like I learned about as much from the goodreads summary as I did from the whole book. But whereas book one has Mercy caught up in a kidnapping situation, this book has her occupying the body of a young woman whose mother is battling cancer. Very sad, yes, but not as suspenseful or gripping.

I think some very interesting questions around faith, responsibility, and free will are raised in this book but I found them choppily interwoven with some chapters following Mercy's body while some chapters dove in to those questions through her dreams. They were not tied together very strongly. Add to that, the lackluster plot and I was less impressed with this second book, somewhat breaking my streak of strong second books so far this year. But I am still intrigued by the promise of this series and I do want to check out book three Muse as well as what looks like the fourth book Fury. If you are interested, I would definitely say read Mercy first before reading Exile. I can't imagine getting a hang on Exile without having had the background of Mercy.