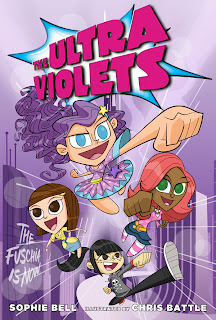 I received this book unsolicited from the publisher and thought it looked adorable. It kind of reminded me of the Powerpuff Girls and I love stories focusing on female friendship especially during the years of middle-school, which are tough. As shown on the cover, this book is about four young girls and incorporates the color purple. In fact, the font is purple throughout  (but still perfectly readable if that's a concern) and there are illustrations included, which is something I adore.

The plot is that four girls were playing in their mom's lab under the less than careful eye of their baby-sitter. One knocks over some mysterious goo and drenches them all. Years later, the girls were separated and then reunited, discovering that they have powers and deciding that they will need to harness their new abilities to fight the shady corporate powers in their town.

As represented on the covers, the girls look very different with their own unique interests and skills. Some are more outgoing while others are more shy so everyone will probably be able to click with at least one of them. While they have the unlikely situation of suddenly possessing superpowers, they also have the relatable problems of friendship, boys, and school, helping to keep this story grounded.

I feel like my biggest problem with this book is just that I'm not the target audience. I think I would have enjoyed it when I was ten or eleven but being more than double that age, it was just not my thing. I would love to see the opinion of someone in the target audience who ate it up!

Other Opinions:
The Best Books Ever