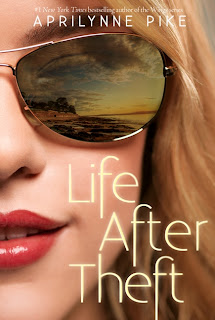 Before reading this, I discovered it was based on the classic novel The Scarlet Pimpernel and resolved to read that first. Hahahahahaha...I am so hilarious as that obviously did not happen. But I still enjoyed picking this book up. Why? Quite a few reasons in fact.

Let's review the plot real quick first. Jeff has just moved to a new school (sidenote for people who have read the book: I keep thinking "Phoenix; it's in Arizona" in my head for some reason. So far I have refrained from saying it to anyone but that's a distinct possibility) and is thrilled to see a hot girl upon arrival. Surprisingly she is thrilled to see him as well because, as it turns out, she is actually a ghost and no one else can see her. She asks (or more like badgers) him to help her atone for her misdeeds in life: a cave filled with items she stole as she suffered from kleptomania. As Jeff attempts to get Kimberlee (not a fan of that spelling) out of his life, he comes up against some secrets and learns some lessons.

First was the compelling male voice. I don't know that Jeff is a typical guy but I found him very sympathetic and I liked him as he tried to do the right thing even in somewhat bewildering circumstances. In a nice addition, Jeff's parents are present and pretty good people. They're maybe not as present as they could be but they're alive and involved in his life to a degree.

Second would have to be the ghost. Of all the possibilities for paranormal creatures, ghosts are at the top of my list (followed very closely by witches) and having one here definitely appealed to me. Kimberlee is not see-through and has the ability to somewhat sit on objects such as a beanbag chair where she doesn't sink to the floor but she doesn't leave an indent. She begins as not very repentant but due to Jeff's good and moral nature, she starts to confront some of the dark misdeeds of her past and make up for them.

Third was the easy writing style. This will come up again but I find that HarperTeen is an imprint that consistently publishes titles that I can easily devour. I don't always fall in love with the premise or the characters or the world building but I usually struggle to put their titles down and this was no exception.

Fourth would be the romance. No, Jeff does not fall for Kimberlee leading to some tortured human/ghost love shenanigans. Instead he falls for a living human being who had previously been bullied by Kimberlee and whose less than fond memories of her give Jeff trouble as he attempts to aid Kimberlee on her quest. This girl, Sera, got in to some troubles during her first years of high school and is also attempting to rehabilitate herself almost in parallel to Kimberlee.

Fifth is the fun twist on The Scarlet Pimpernel. I know I haven't read the book but I have seen a film adaptation (the one with Leslie Howard) and I know the basic story. I am also a sucker for YA retellings of classics and this one was new to me.

So there are my five big reasons for enjoying this book. Have you read this? Do you agree or disagree? If you haven't read this, do this make you want to give it a try?