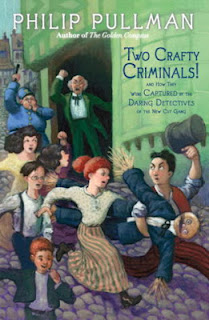 I think it would be nearly impossible to read these books and to be unhappy while doing so. The sheer charm and cheekiness of the main characters completely won me over as did the lighthearted tone of a romp. These stories are not very serious and there are many comedic moments that left me chuckle.

This book is actually two short stories featuring an overlapping cast of characters but focusing on different mysteries. I found the first one confusing due to the many different personalities present while the second one was more to my taste. Realism is not the priority but having fun certainly is!

We start with "Thunderbolt's Waxwork" and the New Cut Gang comprised of several youths. My main problem here was my inability to keep the kids straight. They all seemed very similar and no matter how hard I tried, I couldn't tell them apart. Obviously this makes for a difficult read. The plot itself is also a bit confusing as first the gang is trying to get a sculpture of their friend into a wax museum while also investigating if the father of one of them counterfeited coins. It started with the wax plot and then added in the second awkwardly, which added to my confusion.

The second story is "The Gas Fitter's Ball" which I preferred. In this one, the kids are trying to have a guy propose to his lady love in order to collect on a bet. The mystery comes from some stolen silver. The culprit is fairly obvious but I loved the bumbling attempts of the guy as well as the kids' efforts to ensure that they win their bet. This includes a cute cameo from the Prince of Wales because, why not?

Overall: Cute stories that are well-told; great for younger readers too!

Cover: I love the cute drawings. It captures the chaos of living in their area and references an actual scene from the book.