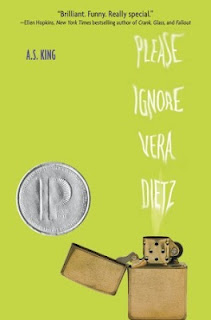 I've seen a lot of praise for the writing of A.S. King so at a recent trip to the library, I decided to check out one of her books and this is the one that caught my eye, probably because of the lime green cover. I wondered who Vera was and why she should be ignored.

Short answer is that Vera is the main character of this book, raised by a single father after her mother ran off and whose best friend Charlie recently died after getting caught up with a bad crowd. All Vera wants is to get through the rest of her schooling before leaving for college but first she will have to confront what happened the night Charlie died.

As you can see from the synopsis, this is a dark book; certainly darker than I was expecting. In fact, I would say it is quite a bleak book with sadness creeping over me as I read further. For example, Vera hears a husband abuse his wife pretty much every day but is encouraged by her father to pretend she doesn't hear anything. Charlie sells his underwear to an old man for significant amounts of money, again with Vera turning a blind eye and not reporting anything.

While Vera is the main narrator, she also gets some help from three other sources. One is that Charlie interjects at a few crucial moments, haunting her from beyond the grave, encouraging to stand up and do the right thing while also apologizing for screwing her over in the months before his death. The third narrator is Vera's father. He only has a few moments but they were some of my favorites as they incorporate flow charts and his awareness that while he may not be the best parent, he does love Vera and wants her to have a better life than her parents did. The last narrator is also the most unusual, being a pagoda that comments upon the antics of the teenagers in the book. It has stood for years and seen their parents and it will continue to stand and see their grandchildren.

As you may have guessed from the amount of time I just spent talking about the other narrators, Vera was not exactly my favorite character. I didn't hate her and I had tremendous amounts of sympathy for her situation. But I didn't click with her and her story.

Overall: My expectations were for a lighter book so I was disappointed in this heavier story despite its excellent writing and deep themes.

Cover: While I find the green deceptive, the lighter does have relevance to the story!

Email ThisBlogThis!Share to TwitterShare to FacebookShare to Pinterest
Labels: 4, Alfred A Knopf, AS King, book, review, YA