The One That I Want 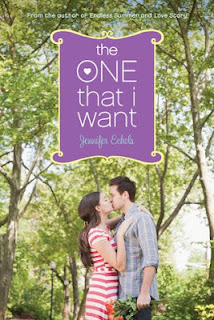 While most of the books I read, I pick up fully anticipating to like, that was not the case here. Although I have loved Echols' writing, I have had serious problems with some of the plots and characterizations in her most recent books, perhaps most notably in Love Story.  And this book features a plot I hate: girl with awful best friend falls for said friend's boyfriend.

That girl is Gemma, a band geek who is trying out for majorette after being pressured by best friend Addison. Gemma considers herself overweight and has been teased about that so there is little that sounds good about performing in a skintight leotard in front of a crowd. But she tries out, she succeeds, and she goes on to lose a good amount of weight, giving her a bit more confidence at band camp where she spies a hot football player from a rival high school. Addison spies the same guy and soon they are out with two guys. One is Carter, the QB, and the other is Gemma's crush, Max, the kicker. But through Addison's aggressive flirting and Gemma's diffidence, the pairs are swapped with Gemma going on her first date with Carter while falling for Max and his quirky personality.

There were so many times where Gemma talked about how she hated Addison and I just could not understand why she had stayed friendly with her for so long. Addison could barely speak without insulting Gemma and she had no qualms about manipulating situations for her own advantage. I know Gemma doesn't have much self-confidence but I think it would be better to have no friends than to have one who is so eager to stab you in the back. Of the several books I've read with this basic plot, Addison is probably the worst friend and the one where I most wanted her to get some comeuppance.

As for the guys, Max and Carter have their own complicated relationship, perhaps akin to Gemma and Addison's. While I didn't swoon for either guy, I can see why different parts of them appealed to the girls. One thing I wondered about was how fast they became boyfriend/girlfriend, ie after one date. I understand that it ups the ante but I don't understand why they wouldn't keep things casual. And of course there is a serious lack of communication between all parties that leads to most of the problems in this book. If people could have just been honest, well, this book wouldn't have happened.

I also wish we could have gotten more insight into Gemma and Addison's childhood friendship as well as into their personal family dramas. Gemma's father is not present in this book although he does send her a brand-new Mercedes-Benz for her sixteenth birthday (yeah, they're super rich). But they don't talk and I think there could also have been more about her distance from her mother. Their relationship is very fractured with her mother basically a workaholic.

Overall: I really didn't like this but dang is Echols' writing absorbing. I absolutely flew through this book because she just makes it so easy.