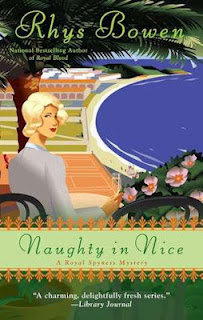 There really is nothing like reading a cozy by one of your favorite authors, especially once the series is established and you already have a good connection with the principals and especially when the setting is historical because it means the author gets to bring in all sorts of fun people.

I always anticipate a fun, fast read from Rhys Bowen and this is no exception. I am currently reading two mysteries series by her and I think this one might be my favorite because I adore the setting in 1930s England and Europe with accidental sleuth Lady Georgiana Rannoch. Georgie is a pretty down-to-earth young lady who just happens to be thirty-fourth in line for the throne. She's basically broke but it is expected of her to live a certain lifestyle even during these depression years (it is 1933 in this book). Luckily with a bit of luck, Georgia scrapes by, in this book, earning a trip to Nice along with many other members of her set to recover a priceless treasure for Queen Mary and to keep an eye on her cousin, the Prince of Wales, and *that* woman. Once there though, Georgia falls in with some new people and becomes implicated in a murder.

I did miss her friend Belinda and love interest Darcy, both of whom do make brief appearances in this book but not as much as they have in other books. I am a little tired of her will-they-won't-they with Darcy as I very much want Georgie to have a steady relationship and maybe even get married as is expected of her even if her adventures are a lot more possible when she's not tied down. But this was also the first book where I really liked her mother, a social-climbing actress who follows the money. Georgie's grandfather also makes a welcome appearance while the historical figures Coco Chanel and Vera Bate Lombardi were among the delightful new characters.

While I rarely figure out whodunnit in mysteries, I enjoyed the storytelling so much that I didn't even care although in this case I did have a few ideas. I wasn't able to piece everything together but I don't think that's the point. The point is to enjoy a light story with humorous details from Georgie's narration and to imagine yourself in the beautiful luxury of the French Riviera even if your real-life circumstances are far different.

Overall: One of my favorites in this series so far-a must-read for fans of Bowen and historical cozies!