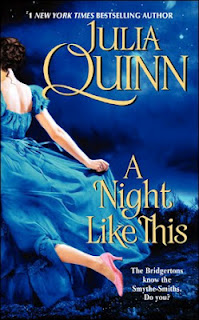 A Night Like This by Julia Quinn
4/5 stars
Avon Books, 2012
Historical Romance Comedy
Book 2 in the Smythe-Smith Quartet

I'll admit that I definitely have expectations when I pick up a Julia Quinn romance. I expect to laugh a lot, to love the main characters, and to be amused by the many secondary characters who surround the couple. Well, check plus on all three points for this book!

I feel like once you're familiar with Quinn's style, it is immediately recognizable. And that is the case here. I love returning to this London and to the great families she creates. There is so much love evident and for someone who prefers a lighter story, it is so comforting. I don't want angst-I want to have fun and Quinn always delivers!

This is the second book in the Smythe-Smith quartet and it overlaps with the end of the first book, Just Like Heaven, which I read last year but did not review. Daniel Smythe-Smith, Earl of Winstead, has returned from abroad where he had escaped after foolishly dueling with and injuring a peer with a powerful and protective father. It is supposed to be safe for him to return. However it is not exactly as he promptly loses his heart to his sisters' governess the lovely and mysterious Miss Anne Wynter. Anne has worked very hard to reach her current position and does not want to jeopardize it by flirting above her social stratum.

But as the book progresses, of course, she is charmed by Daniel and falls for him. Alas all is not well though with Daniel suffering several attacks that may have been orchestrated by his friend's father who still harbors a grudge and with Anne also threatened by someone from her past. Her story is an old one but not one any less worthy of compassion.  I especially liked the climactic ending because of course Anne's past has to haunt her and of course Daniel has to go after her. But happily Anne can be her own heroine and save herself with Daniel just providing additional support.

While I did miss Lady Danbury who I remember playing a role in the first book, it is more than made up for by Daniel's three younger sisters who dearly love each other. One is an aspiring playwright and another has an obsession with unicorns; just a few of the quirks that make them so much fun to read about. And of course we have the traditional Smythe-Smith performances that open and close the book and will probably never not make me smile.

Overall: I think I actually liked this book more than the first although warning to those who don't like love at first sight stories. I usually don't but Quinn is so masterly that I end loving them.