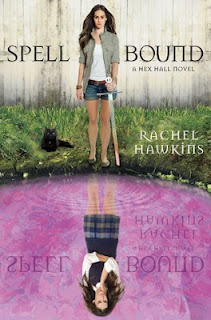 Some spoilers and references to the previous books-read at your own risk!

I was both excited and nervous to pick up this conclusion to the Hex Hall trilogy. On the one hand, I really enjoyed first book Hex Hell and sequel Demonglass, which ended with a killer cliffhanger. But I was unable to prevent myself from skimming some reviews and it looked like I would be unhappy with the resolution of the romance (if you look at my reviews for the first books, you will see that I am firmly anti-Archer).

Happily this book picks up shortly after the end of Demonglass with Sophie learning some pretty important (and surprising) things about her family. I am not going to spoil you-you will just have to pick up this delightful series and find everything out for yourself! What I can share is that Sophie gains some additional allies in her fight against the villains of the book, which is good as she could use the support. I really liked the new people we meet and they have some great snarkiness in the beginning although as the book progresses, we focus more on Sophie herself and her powers.

At the beginning of the book, she is unable to access them, since she was stripped in the previous novel. This leaves her feeling incomplete and increases her fear. This also leads to some interesting scenes where Sophie is possessed by a ghost who can perform magic. Those were some of my favorite scenes with many interesting consequences.

SPOILER:
However Sophie is incredibly powerful and I never felt much suspense around whether or not she would be able to defeat the threat once she reclaimed her abilities. Not just because this is a book and that is the ending a book should have. But just because she seems so much more powerful than everyone else around her. As long as she maintains control and focus (a bit of a problem in the first book), she can easily kick butt.
END SPOILER

Surprisingly I came around on the Sophie/Archer connection. I'm still NOT an Archer fangirl; I will not swoon over him and I don't think he's good enough for Sophie but I found myself enjoying some of their scenes together. They just seem to "get" each other. The resolution for Cal is not what I would have preferred but it makes sense and provided me with closure.

Overall: A good ending to a really enjoyable series-definitely recommended for the reader who likes some snark with her paranormal as well as some magic, adventure, and romance!

Cover: That cat is still present; am I missing something? I still don't remember reading about a cat in any of the books even though he has been present on the cover of all three. Though I like imagining that Sophie is lucky enough to have a nice, soft kitty cat in her life.