The Hero's Guide to Saving Your Kingdom 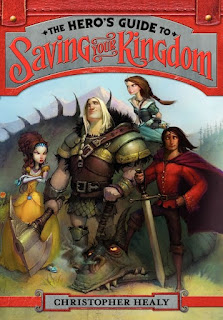 As a huge fairy-tale lover, of course I wanted to check out this new twist focusing on the princes Charming this time instead of the princesses-they always get the spotlight! In this story, we are introduced to four princes, all with very different personalities, who are determined to set the record straight since it has been so bastardized by the local bards. Besides their journey to right this wrong, the princes also have their own personal battles to face.

First is Frederic, an extremely delicate prince whose sense of adventure was quashed by his father but is being awakened by his relationship with Cinderella. Ella's restlessness persuades her to leave the life of luxury in the palace and Frederic's love spurs him to follow her, requiring him to undergo many trials and do without. I liked Frederic (well, actually I liked all of the princes) as he was a sweet guy with an obvious love for his princess. Frederic needs to learn to be bolder as well as how to interact with others better over the course of the novel.

The second prince is Gustav, the youngest and smallest of 17 sons and subsequently with a huge chip on his shoulder. His moment of bravado in climbing up Rapunzel's hair was marred when he was thrown out of the tower, blinded, and regained his sight through her tears. He thus pushed her away and quests to claim the glory he feels is his due. Gustav's strength is actually his strength as he is fair and away the strongest of the bunch. But he is also bullheaded and overeager to prove himself, which needs to be reined in as he works with the other princes.

Liam is our third prince and he is a true hero, whose greatest achievement was battling the evil fairy before awakening Sleeping Beauty. Unfortunately she is evil and soon reveals her true colors. When Liam blanches at marrying her, her spin team moves into action, besmirching Liam's good name and making life very difficult for him. Liam is a natural leader but needs to learn how to take into account his team's strengths and weaknesses. (Incidentally Liam might be my favorite and I imagine him as very handsome :)

Lastly we have sweet Dustin, an uncommonly lucky young man who woke up Snow White and married her. However he is also loud with a habit of barging into situations without thinking. This often works out for him since he doesn't realize the danger but it needs to be properly directed. Dustin is also a very chatty fellow, to the dismay of most around him as he rarely knows when to stop. But he has a good heart and desperately wants to prove himself to his new friends.

We also get five princesses: the adventurous Ella (who reminded me of Tangled's Rapunzel), the sweet dreamy Snow White, the helpful Rapunzel, the villainous Sleeping Beauty, and Liam's younger sister Lila. Given that Disney's Aurora is my favorite princess, I had trouble with the fact that this Sleeping Beauty was so vicious but that is very much a personal preference. The only problem is that there's a reason most of the fairy tale retellings I read focus on the princess: I tend to like them more. Even as I fell for the different princes and rooted for them through their struggles, I was wondering what was going on with the ladies.

A few last points to mention include the writing style which is of a third-person narrator who often gives the audience sly remarks. It's a very chatty humorous style that brought me right into the story. I liked how the different kingdoms were set up although I had a little bit of trouble remembering them. But last and most exciting is that there is plenty of room for more stories to be told in this room; I know I am eagerly awaiting more!

Overall: A charming humorous story that should please both the target middle-grade audience as well as adults with a soft spot for fairy tales.

Cover: I kind of wish it had all four guys but I really like the brunette woman in green as her determined expression makes me think that she is A. Ella and B. reinforces my comparison of her to Rapunzel in the Disney film.