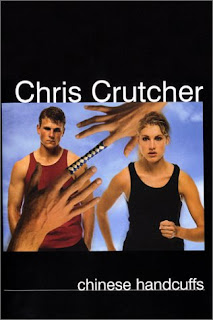 I think I've made no secrets about my love for Crutcher-his books just hit me right in the gut and I love them.  I've been trying to read through his oeuvre slowly in order to be able to savor them for a while. This one hit me hard.

Crutcher does have a lot of the same themes and plots in his books, which I've seen as I read through them. This one also featured some of the darker ones including descriptions of two animals being murdered, two child molestations, suicide, and other assorted acts of cruelty. Brutal-why do you do this to me Chris Crutcher?! In fact, although Crutcher has had similar occurrences in his other books, these seemed more graphic and I was almost ready to put the book down but it's so short so I figured I could power through it.  I just don't have a very strong stomach.

Another problem was that I didn't find Dillon Hemingway as compelling as other Crutcher MCs.  He's in the same mold: talented athlete, school troublemaker, dedicated to figuring out what's right. But for me he didn't have the charisma of TJ. Another thing I didn't like and actually found jarring was that part of the book is told as letters from Dillon to his dead brother (first person), which would then shift to third person narrative.

As you may have guessed from what I've mentioned, this is a pretty intense book. And disappointingly it didn't turn out the way I wanted...well, until the absolutely kick-ass last page. I was caught completely off-guard but just fist pumped at the end because I was so happy.

Overall: Not one of my favorite Crutcher's; I would suggest the other ones I've read.

Cover: So tremendously ugly; I mean this makes sense in the context of the book but they're weirdly arranged and if it didn't have Crutcher's name on it, I never would have picked this book up.