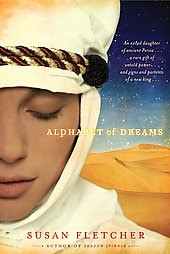 While browsing at my library, I came across this older YA book and thought it looked intriguing. I knew nothing about the plot or the author's writing when I checked it out, which made for an unusual read. As a YA blogger, I'm usually very aware of the latest books and have an idea of what to expect but this is an older one so I had zero expectations.

As I read this back in December though, I realized how appropriate it was for the season as it is a twist on the story of the Three Wise Men arriving at the birth of Jesus. However the Magi are secondary characters, to Mitra and her younger brother Babak. They are currently surviving as thieves until Mitra discovers that Babak can seemingly dream prophecies, which can be and is monetized. Then their fortunes become entangled with the Magi as they journey to seek a king.

I thought the beginning was solid. Mitra and Babak are of royal blood but are in fear for their lives as their father's failed rebellion against the king leads the way to retribution. Babak is a sweet little boy and Mitra is a protective older sister, disguised as a boy for her own safety, who longs for her old life and what she sees as her birthright. She doesn't always make the best decisions, being young and somewhat selfish but she's understandable.

However as the book progressed, I found the story becoming muddied. Mitra is in an imperfect disguise as a boy, which is discovered by several of the guys she meets and she soon starts wondering about two of them and contemplating a future with either. One guy just "knows" her but she wishes for the other guy to discover her secret as well. It was annoying and pointless to me. The journey meanders too with many characters introduced but with few of them impacting the story much.

I did like the twist on the famous story of the Wise Men but thought the interweaving of Mitra/Babak with the Magi was a little awkward. I definitely still love the idea of having classic stories expanded with more color and personality for the characters but I didn't think this one was handled well.

Cover: A non-white MC who is represented on the cover! It was more the title that grabbed me but that definitely caught my attention.