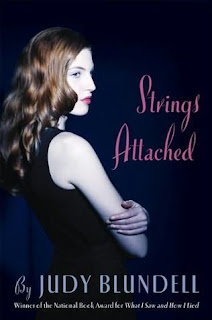 After reading The Girl Is Murder, I was left craving other YA historical fiction from the same time period. Due to my ignorance of hair styles, I thought this book was probably from the 1940s. Instead it's a bit later in the 1950s which is still pretty good as that means red scares, bomb scares, an entirely different war, and all sorts of other problems.

And it did have those things but what it really has was a confusing narrative structure with frequent jumps to the past. Sometimes as little as a month, sometimes going back to main character Kit Corrigan's childhood. Each chapter does start with the month and year in which it is set but such jumps are not my favorite way to convey a story. I understand why the story was told this way as the revelations fly off the page but I don't have to like it (and I didn't.)

Also while fears about Communists, bombs, and death in Korea were present, they were not the focus. Instead we have Kit's dreams of being a dancer on Broadway and her family's history with the charismatic but destructive Nate Benedict, lawyer for the Mob. While Kit's father was somewhat entangled with gangsters during Prohibition, he got out; Benedict only got in further, leading to some benefits (money) and many drawbacks (the cost to his family).

While Benedict seems largely benign at the start, his choices mean that he reaps what he sows and becomes quite scary toward the end. His son Billy is a particularly unfortunate case. He and Kit had been involved but his temper and, as we learn, guilt over his father's misdeeds lead to the end of them. Of course, Kit plays her own role by accepting Benedict's generous offers in exchange for increasingly morally difficult favors. And I didn't find Kit to be a particularly compelling character

Overall: I guess I wanted more of the glamour of 1950s Broadway and Communist searches and less of the mobsters. Also again I found the narrative style off-putting.