The Lady Most Likely 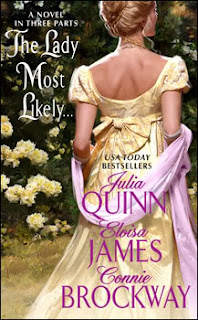 I just adore Julia Quinn; I think I've read all of her published novels and at some point I will read all of the Bridgerton epilogues. I've had mixed experiences with Eloisa James (problems with story choices) but the writing was enjoyable; and I'm not familiar with Connie Brockway but since I'm usually in the mood for a fluffy Regency romance, I figured why not?

The framework for these stories was delightful. Carolyn is requested to help her brother, Hugh, the Earl of Briarly to find a wife after an experience that might have left him dead. Hugh needs a wife and an heir, so that he can get back to his first love of horses. Consequently Carolyn arranges a house party with eligible young parties and starts matchmaking. Before and after the stories, we got to see Carolyn with her husband and what a great match they were! I liked them way more than I did the others.

The first story is between Hugh's best friend, another earl and the belle of the season, who Carolyn had hoped would marry Hugh. The belle is the beautiful but shy Gwendolyn whose demeanor comes off as snobby to jealous girls such as the earl's sister. When she begs him to distract Gwen so that she can have some suitors, he happily obliges. Thus do Alec and Gwen meet and fall in love. This was Quinn's story and I felt that it unmistakably had her signature on it. This was also my favorite of the collection.

The second story is from Connie Brockway and unfortunately features a trope I loathe. This is a trope of two young people who like each other and could move toward marriage. When he attempts this, her father deems him unworthy and said man leaves, never telling the woman why but leaving her to forever pine for him. In general the man also never apologizes for sucking. So while the writing was just fine and the shortness made this more bearable than other stories using this plot, I could not get over my loathing of it.

The last story was okay; it is about Hugh finally realizing that the woman of his dreams is his sister's widowed friend Lady Georgina, who seemed to be on the point of swearing never to remarry. What bothered me about this story was Hugh's sudden realization that Georgina was, in his words, "Mine." This was repeated and I just wanted to slap him and say that no, she was her own person.

Overall: In some ways this is the light fluffy Romance novel I wanted; there are lots of cute exchanges between all of the couples. But due to some personal pet peeves, I did not enjoy this.