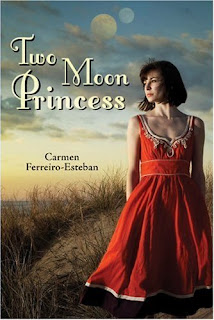 Based on the cover and title, I thought this was going to be a fantasy along the lines of maybe a Tamora Pierce story. I should have examined the cover more closely to notice the girl's contemporary wardrobe, foreshadowing how main character Princess Andrea travels between her world of historical fantasy and our world of the 2000s. While this is an interesting concept, it wasn't what I expected and that contributed to my disappointment.

The other disappointment was the characters, especially Andrea who is 14 in her world, which translates to 17 in ours due to different measurements of time and who seemed to waffle between those ages, making many incomprehensible decisions. She didn't seem like a coherent character. First she wants to be a squire, then she is adjusting to California life, then she's back in her world, trying to avert war. I can connect her actions in my mind but the dialogue and description painted her in vastly different ways over the course of the novel. And not because she was growing but because of author convenience, it seemed.

The other characters were also a tangle of personalities, with either abrupt personality changes or not enough background.  For example, Andrea has three sisters, all of whom could have been potentially interesting but who were really sidelined. The sisters do have an impact on the plot but at the expense of their character development, at least in the eyes of this reader. Andrea's mother was also a confusing figure; she was actually from our world but she gave that up for love with a man who seemed more cruel and unworthy of her love, at least in his behavior to their daughters.

There were some nice points against war and about male pride, that I tend to agree with. And the story itself had some cool threads. Two worlds colliding and a girl struggling to find her place could be a great story. But because of the characters, this one just didn't hang together and left me frustrated with them.