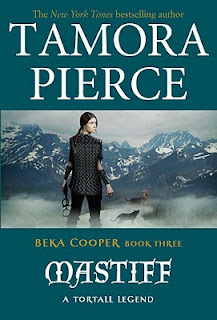 In the conclusion to the Beka Cooper trilogy, we come to this massive doorstop book. I was so intimidated picking it up from the library and realizing its size. Additionally it opens with Beka at the funeral of her fiance, Holborn, who I didn't remember! Luckily after some searching, I realized that he had not been introduced before, which creates a jarring effect. Why start honoring the death of a character we don't know?

But then it does move into the story, which puts Beka, her partner Tunstall, her scent hound Achoo, and constellation-in-cat-form Pounce on the hunt for the kidnapped prince, a tangled web of disgruntled mage and nobility deception. Along the way we also meet a new character, a mage Farmer Cape, who is brought onto the Hunt to counter the many magical challenges they face. In short, he is delightful. He is full of curiosity and is very inventive. He's funny and sweet and I obviously fell for him...as does Beka.  We also see some of the other characters from the previous books such as Tunstall's lover Lady Sabine and Beka's patron Lord Gershom but the focus is on the core group hunting the prince.

And despite its bulk, this book does move fairly fast. Part of that is due to Pierce's confident writing style and the engaging characters. Then there is the nature of the story, which is tracking clues and attempting to piece disparate elements together. That kind of story usually compels me to read as fast as I can to discover what happened.

One of my favorite parts was the end, which returns to time of Alanna and shows George Cooper, descendant of Beka, as he begins his reign as the King of Rogues and just after he's met "Alan." Great shout-out for fans of the Song of the Lioness Quartet and hopefully intriguing enough to get any one who hasn't read those books to pick them up.

However this book is far from perfect as you might surmise from my rating. First as already mentioned is the opening, which made it hard for me to get in to. Holborn meant nothing to me and while Beka had disengaged from her fiance, meaning that she wasn't in mourning, it made the whole start awkward.  Additionally Pierce seems to have wanted to focus on the devastating effects of slavery but it is a little heavy-handed rather than naturally included. One last point is the reveal of a traitor to Beka; other readers have been very upset with the twist. I could see why that person was chosen but I really wish it hadn't happened.

Cover: Beka's head seems at a really awkward angle; I can't imagine that it is comfortable. I do like seeing Pounce and Achoo though.