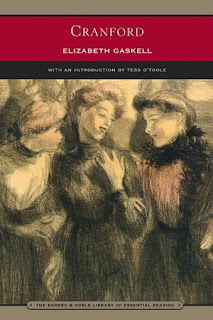 I honestly don't have much to say about this book as I mostly read it for my Fill-in-the-Gaps challenge and to further my acquaintance with Elizabeth Gaskell (I've read and seen North and South and seen Wives and Daughters as well as the miniseries from this book). Usually I read YA books in part to be aware of the hyped books as well as lesser-known gems. Not much really happens in this book, which is set in approximately 1830s small-town England. While the world around seems to be modernizing and industrializing, Cranford seems to remain steadfastly the same: ruled over by ladies and filled with compassion and kindness.

Of course that is somewhat revolutionary in a book as most seem to focus on the masculine sphere or else have a love story. While there are elements of "manly" commerce as well as marriages, they are not the focus. There isn't much driving the story either; it kind of just meanders mostly centered on Miss Matty, an elderly spinster, and her closest circle. Miss Matty is just the sweetest person and all of the characters are pretty nice people. But there wasn't much excitement for me.

In fact, this book took me a rather long time to read considering the length. Just one chapter seemed to take me forever to read. And I guess that contributes to my lack of enthusiasm in reviewing. I would like to say that this is NOT a bad book by any means but it is not the book for me.

Recommended: For fans of Gaskell and if you've seen (or plan to see) the miniseries.