The Orphan of Awkward Falls 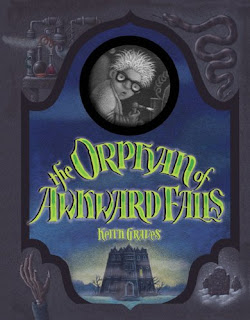 I wasn't really sure what to expect from this book, other than hopefully a charming MG story. I was also pleased to discover that there were illustrations included as I read through this weird tale.

Josephine has just moved to Awkward Falls, location of an insane asylum housing cannibal Fetid Stenchley, who manages to escape through a very poorly planned event. That is unknown to her when she stumbles upon the titular orphan, Thaddeus, a mad scientist who lives with his grandfather's robot servant (awesome!) and a talking reanimated cat, among other oddities. These people and more collide in a crazy adventure.

I have to say that I was somewhat reminded of the Series of Unfortunate Events while reading this. I'm not sure if it's because of the presence of an orphan, the presence of a sauerkraut factory in the town, or if it's the odd happenings or something else. But, whatever it was, I liked it.

Josephine and Thaddeus are sweet kids with understandable motivations and desires. The aforementioned robot servant is wonderful: loyal and brave. And Josephine's parents even get to play an important role in the book-yay for parents who care about their children, who believe and trust even when the truth sounds crazy!

Boo on mad scientists as Thaddeus' grandfather is revealed to be. Boo on cannibals, even though Fetid is revealed to be a bit more complicated than that. He does have his own loyalty system but he spares no hurt for innocent people and too singlemindedly pursues his own desires instead of considering others.

Don't worry though! In the end, our heroes will end well while the cannibals receive a just punishment. A quirky story with good characters and some imaginative escapades.