It's a Wonderful Life 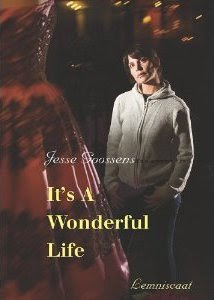 This book grabbed my attention due to sharing a title with the beloved Christmas movie as well as a blurb touting a main character with a love for movies, a love that I share. I'm partial to the classic old ones but I can enjoy a modern blockbuster too.

It's different from most of the YA I read as it is actually a translation from a Dutch novel, featuring a Dutch teenager who instead of partying in Spain with her friends is sent to Pennsylvania for what might be the dullest vacation ever. Except that the people she meets are genuine and kind and might be exactly what Anna needs at this crossroad in her life.

There are a lot of bizarre occurrences in this book: an eighteen year old funeral director, another young funeral director who is in competition with the first, both for business and for Anna, the vintage store which has a steady supply of famous movie props if you believe Anna's stories, a yearly toast to the "hoax" of the moon landing, and more. Looking back, the events seem odd but in the context of the story, they create a quirky small town where Anna finds a place to belong.

Another part of the charm of the story is Anna herself. Although disappointed about not going to Spain, she accepts her parents' directive and throws herself into small-town life, learning how to drive, taking up responsibilities, and building connections. The other characters are also sweet although as the book is quite short, there isn't much time spent on them.

Overall: An offbeat story that will take you someplace different from the typical, mainstream YA novel.

Cover: I liked the girl looking at the lovely dress but it's a little plain for my taste.