There You'll Find Me 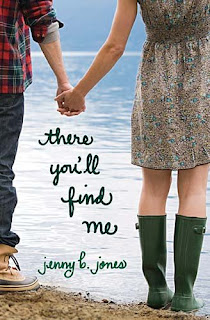 Summary: Finley is going to Ireland as an exchange student, hoping to feel closer to her brother who was killed in Afghanistan and who had also spent time there; she is lost, adrift from friends on earth and angry at a God who doesn't seem to hear her. But her plans are radically altered when she ends up sitting next to movie star Beckett Rush on the plane. As the pressure in Finley's life mounts,

So I was sitting, getting ready to write this review and trying to come up with something I didn't like about this book. Not because I want to be negative but because I find myself being very particular now about books and I want to provide good guidance to potential readers of this book.

Yet, I find myself incapable of thinking of something. There were some characters I didn't like...but I wasn't supposed to like them as their superficiality and meanness toward the main character (Finley) would have them classified as antagonists.  I didn't like the main character's refusal to realize her eating disorder...but again I think the reader is supposed to be worried about her health even as she stubbornly claims to be "fine, just fine" and that her eating habits will go back to normal once one moment of stress passes.

I guess I could complain about the bickering relationship between the romantic leads but I totally fell for it. The running joke of Beckett calling Finley various names that start with "F" always made me giggle. I actually didn't even think they would end up together (a la my beloved Teen Idol); they could have just been friends but they ended up really challenging each other. Beckett called Finley on her need to control and how she pushes away; Finley helped Beckett with his career choices and therefore impacted his whole life.

Maybe I could complain about the pacing? But no, I thought that was pretty great too. The reader's slow realization of Finley's eating problems and the pain at seeing her war against God got me good. I wanted to force her to put her trust in Him but of course I could only wait. I guess some parts were a little predictable but it still packed a satisfying emotional punch.

Overall: Just an amazing book, with a very flawed main character whose journey has only just begun and who I would love to get to spend more time with.