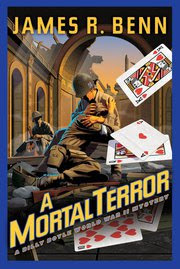 I was a little nervous about picking this up as I could see that it was part of a series; however I could also see that it was set during WWII and I thought that premise had so much promise so I bit the bullet and requested it. I am so happy that I did as I received a solid mystery, even if it was a bit outside of my ken. I also think there are tremendous possibilities for this series. Yes, it is already on its sixth but there is still so much that can be included and explored in future outings.

The book opens in Switzerland with Billy Boyle covertly meeting his love Diana, who is an undercover agent stationed as a nun in the Vatican, with news about atrocities being committed by the Nazis in Poland.  Much as he would like to just be with her, he is soon commanded to follow a different path to Anzio, Italy, investigating the murders of a lieutenant and a captain. Each was found with a playing card (10 and Jack of Hearts), leaving those in the next rank, that of major, on edge. To compound his anxieties, Billy's younger brother is being shipped overseas to serve as a replacement in a dangerous post.

While I am very interested in World War II, the military life itself is not something I read much about. Mostly that is because I prefer books with female leads and most military stories feature males exclusively. Thus military hierarchy and procedure is always a bit confusing to me. No exception here as I kept forgetting if a lieutenant or captain was higher; I did know that major was above captain. Happily while that is a plot point, human nature is far more the focus here.

Combat fatigue has hit many of the men hard; understandable as they've been fighting almost nonstop with heavy casualties and insufficient replacements. Psychoanalysis also plays a big role as some doctors are evaluating those experiencing combat fatigue while some leaders refuse to admit the possibility of such a thing, dubbing the men cowards.  There is also the idea of the psychopath, the kind of man who will be able to resist combat fatigue as he glories in the duties of war.

This background helps to identify the murderer; or it could help if you were a better detective than me. I only caught on when it became blindingly obvious. There are many possibilities, which left me feeling frustrated and overwhelmed.  And while I was happy to identify the murderer and read how Billy caught him, I was much more interested in the other subplot, revolving around Diana. I hope the previous stories feature her as I would like to read more about her-hey, I like female MCs!

Overall: A solid historical mystery, delving into the complexities of the historical period and warfare itself.