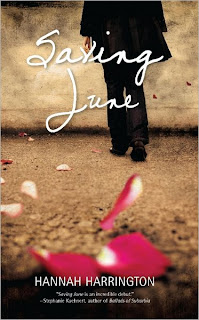 I'll admit that I wasn't totally enthused to pick this book up, having seen that it revolved around a girl dealing with the death of her sister. I've read several of those books in the past year and while I'm a sucker for the sister-sister dynamic which can be explored through them, they're not my favorite. Especially because the surviving sister is often really mean and resentful of her "perfect" sister (the dead sister always seems to be eulogized as just perfect and living up to expectations).

And at the start that is sort of how Harper seemed; she rebelled against the perfection of her sister June and slacked off at school, cultivating an appearance diametrically opposed. She also cursed and smoked a lot, two disgusting habits in my opinion. But in this case, a lot of the book focuses on a road trip from Michigan to California which leads to other insights and was very captivating to me.

Accompanying Harper on this trip are best friend Laney, definitely one of the best friends I've read in a YA book, and bad boy Jake Tolan who has his own mysterious relationship with June. Along the way, they meet some awesome college students (who have some great discussions that were among my favorite parts of the book) as well as several side trips. Admittedly I'm a bit more organized so while I could appreciate what happened at these stops, it also grated against the control freak in me who would have just wanted to reach California.

Once I got past those feelings though, I was really absorbed in the road tripping. It seemed to take a bit too long to reach that point but the pages flew by once I was immersed. I do think that Harper made some dumb decisions but she's only a teenager and she has a lot of problems; she's not perfect. Laney also has her problems, BIG ones but she still supports Harper and can almost anticipate what Harper needs-applause for her! Jake was a bit cliched with his rebel ways but I did like his near-encyclopedic knowledge of music (I'm a sucker for trivia).

Besides the great depiction of a best friend, an awesome part of this book is that it introduced me to another song with my name in the title, Velvet Underground's "Stephanie Says," as well as featuring some great classic rock and other genres of music. Track lists are included at the back for you to explore for yourself-I thought they were great lists!

Overall: An unexpected delight with moments of levity interspersed with the seriousness.