Forever and a Day 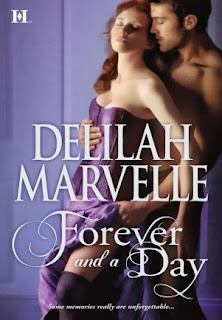 I've read two of Marvelle's previous romances and enjoyed them even though they're a bit darker with heavier subject matter and language than the fluffy Regency romances I usually peruse. This one looked to be in a similar vein to Marvelle's other works so I boldly took the plunge.

It ended up being sort of a mishmash with lots of great individual parts that didn't completely cohere for me.  First there's Mrs. Georgia Milton, an Irish-American widow, meeting a posh aristo on the streets of New York City; minutes later, he's unconscious and in hospital.  This was a very short part and it didn't really endear the male to me as he seemed extremely forward but I suppose it speaks of their instantaneous connection, which will be referenced later.

Then the male wakes up with near-complete memory loss; he calls himself Robinson Crusoe and can remember parts of that book as well as others but not his own name or life story. Georgia agrees to room him while a search is conducted for his identity. Here we learn Georgia's story, how she's fought for everything she has. We see how she was married and widowed and she and Robinson forge a passionate relationship. This only lasts about a day before "Robinson"'s father shows up and announces him as an heir to a dukedom who needs to return to England. This part had its moments but was fairly boring as they're just living an ordinary life in a rough part of New York City. I confess a weakness for society balls in Regency romances rather than "ordinary" historical life.

Robinson or Roderick as he is actually named is willing to return but, after confirming his bachelor status, wants to bring Georgia as his bride, an idea his father rejects. What would the ton think of this rough American woman? They would rip her to shreds.  Roderick hesitatingly gives Georgia up. But she's not through with him yet as the final part demonstrates. We also learn Roderick's backstory-in fact there's a lot of flashbacks throughout to sketch out the main characters. I didn't hate that but it's not my preferred idea of how a romance story should be told. I also didn't really click with either main character, which is bad for a romance.

Hands down, my favorite part was the ending when Georgia shows up after about nine months, thoroughly transformed into an American heiress and boy does she make Roderick crawl and pay for the pain he had put her through! It was a very short section but also the most enjoyable in my opinion. While I wasn't super invested in their love story, I still like to cheer when two people fall and fight for each other.