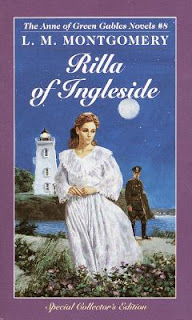 This is the last book in the Anne of Green Gables series and one with a more serious tone as World War I breaks out and several of our beloved male characters enlist. However this book, as you might guess from the title, focuses on Rilla, youngest child of Anne, and life on the homefront in Canada during the Great War.

There was a lot to love about this book. First unlike the previous two books, this one focuses one just one character: the lovely spoiled 15-year old Rilla. Because it follows just her, I had a greater understanding of her, of her hopes and dreams AND was still able to learn the fates of my favorite characters.  Over the course of the book, Rilla matures so much and endures a lot. She was a great character and even had some of the irrepressible joy of her mother.

Second, this book is mostly set during WWI. The beginning of the book overlaps with the assassination of Franz Ferdinand, an event the papers mention but few take notice of. How could the death of an Austro-Hungarian archduke affect the denizens of Canada? But too soon, everyone is swept up into war. Rilla has three older brothers and various other young men around the island enlist, including Rilla's sweetheart. No one is spared the pain of missing loved ones and some do die. Thus the emotional stakes are very high.

Third, this was a different book for me. I've read several books set during WWI and other wars. I've read books about serving at the front and about staying at home. But I'm an American and most of the books I've read have been about the American experience. This is a Canadian book and thus follows the fortunes of the United Kingdom and Canada. Thus I got to learn a bit more about the Great War!

Overall, an excellent mix of the serious with the humorous to leaven the tense parts as well as featuring a great character arc and some history lessons.