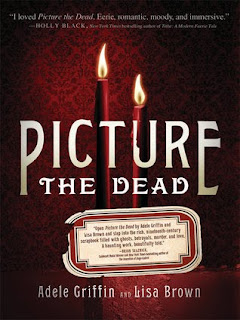 I've lately been interested in YA books with illustrations included in the pages and combined with my general admiration for Adele Griffin, I figured this was a no-brainer.

It did end up being a little bit of a mixed bag for me, although overall I liked it.  I loved the pictures but there was writing included that I found hard to read especially because it was white font on black background. But the actual pictures themselves were amazing and apparently based on real examples, which makes it all that much cooler to this history nerd. I also loved that it was set during the Civil War (toward the tail-end) as that's probably my third favorite time period.

Then there was the story itself: well-written, good pacing, and plenty of suspense around the presence of the ghosts. However I didn't really feel main character Jennie Lovell. I could sympathize with her plight (unwanted ward of family, frightened of where she'll end up now that her fiance is dead). Most of the other characters didn't endear themselves to me, except for Jennie's fallen fiance Will, whose name I love (there are so many great YA boys named Will).

I also loved the inclusion of some lesser-known Civil War facts revolving around the prison Andersonville, known as Camp Sumter. I did not know that second name so I was confused at first but the author's note helped clarify and expand my knowledge-love it! I also loved the inclusion of spiritualism, a phenomenon gaining strength due to the loss of so many during the war and one that went on for a long time afterward. I've read late 1800s books with spiritualism at the center. It's interesting to imagine the possibilities of contacting your loved ones once they've passed. I also enjoyed that I read this around Halloween but it wasn't too spooky.

Overall: A well-written and illustrated book but not as strong character-wise.