The Dragon and the Pearl 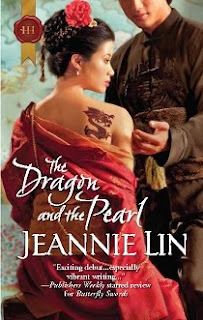 The Dragon and the Pearl by Jeannie Lin
Harlequin, 2011
280 pages
Romance; Historical
3.5/5 stars

I had read Jeannie Lin's first book Butterfly Swords so I was excited to get a chance to read her second. Although it contains characters from that book, I didn't really remember them so it was like starting afresh.

The main characters this time are Ling Suyin, former consort of the now dead Emperor, whose beauty and wiles are (in)famous across the country. Her love interest is the brutal Li Tao, whose honor and loyalty drive him and have made him a feared leader of soldiers and a potent threat to a weak emperor.

At the beginning, I was somewhat confused as I felt there was a backstory I was missing. I can't remember if more was conveyed in the first book about these two but since it is not explicitly a sequel, I also feel like it shouldn't matter. The potential passion between the two characters is always simmering and explodes when they finally succumb to each other but there also seemed to be something unspoken between them that completely passed me by but that I desperately wanted to know so that I could more fully sympathize with them. There were flashbacks, which helped to explain the characters' reticence and fears about the other, and they were awesome. But still something eluded about them eluded me and kept me from being fully engaged.

I did enjoy the setting, which sees the Chinese Empire crumbling around them, adding instant drama. I remember enjoying the politics and history of Butterfly Swords as well so I'm not surprised that I liked those aspects again in this book. There are very high stakes surrounding the characters' lives, which forced them to make bolder decisions regarding their relationship and I was very tense in some parts.

Overall: An interesting read but I felt that something was missing to bring the main characters to life.