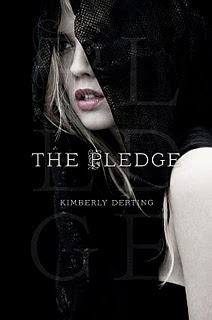 After seeing the buzz in the blogosphere and having enjoyed Derting's The Body Finder, I was thrilled to see this in the GalleyGrab newsletter and promptly downloaded it for my NookColor.

What I found was a fast-paced novel that found me frantically flipping through pages, dying to know what was coming next, trying to piece together the crumbs dropped by Derting about this unique fantastical dystopia. And yet the characters didn't burrow under my skin and capture my attention and affection as Katniss and crew did in the Hunger Games trilogy for example.

Charlie lives in a class-divided society, where everyone is divided by language. The upper-crust have their own distinct language, which only they can know and use. And yet Charlie, despite being in the low merchant class, can understand every language she hears. She must keep this secret for it might prove deadly if anyone learns of it. One night her best friend Brooklynn drags her to a club where she meets the mysterious Max and Xander, in separate encounters, and she overhears a language she has never heard before.

This leads to secrets uncovered, violence erupting, and rebellion ongoing in plot twists that kept me on the edge of my seat (although I did guess correctly at a few!) The action was pretty intense as Charlie must become more of a leader and learns shocking family secrets. And the ending is mostly great with an intriguing tease at what will come in book 2.

But the characters! I felt no connection with Charlie; she was just there. Her love interest is Max and I really disliked him, although on the surface there's nothing too bad about him. I would have to say that I enjoyed Brooklyn and Xander more; her for her lighthearted frivolity and Xander for his serious leadership and dedication.

The villain is the Queen, who rules over this country and who is grasping onto her life and power with every ounce of strength in addition to possessing tremendous magical powers that make facing her difficult. I actually found her more interesting than Charlie; what strength of will she had! And her sly plotting and knowledge! The little tidbits we received of her what were really grabbed my attention.

Overall: Read this for suspense and story, not for character development as the former is where its strengths lie.