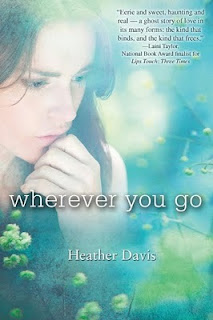 This book is narrated in a most unusual way: it alternates between first-person for main character Holly, third-person for friend Jason, and second-person for Holly's ghost boyfriend Rob. I was a little thrown to pick the book up and be addressed by the character but I quickly grew used to it and the device really helped me distinguish whose perspective we were following.

Holly lives with her single mother and her younger sister, taking on most of the responsibility of caring for the latter, and additionally shouldering the burden of caring for her Alzheimer's-stricken grandfather. Plus she's a social pariah, as most of her school blames her for the death of her popular, rich boyfriend Rob.

Jason is Rob's best friend who has had an interest in Holly and begins to reach out to her over the course of the novel and falling in love. Meanwhile Rob is a ghost and confused as to why. When he discovers that Holly's grandfather can see him, he tries to reach out to Holly through him. But since no one else can see Rob, they assume that the grandfather's mind is just deteriorating.

There were some absolutely beautiful and heartbreaking sections of this book. I so admired Holly for her strength in dealing with her boyfriend's death as well as the burdens of taking care of family and home. I've had a pretty privileged life and I was so humbled by Holly's selflessness and commitment to her family even at the expense of having a "normal" teenage life.

However I was put off by the ending where Holly's selfishness comes out as does the mother's. I guess it added some conflict in a book that is not heavy on conflict (I feel like it is more character-driven) but I ended up really disliking both characters because of that. Jason is a nice guy but I didn't feel like there was that much to him. He's pretty swoon-worthy as he devotes himself to winning over Holly by helping her care for her family and he puts her interests first; otherwise I didn't detect much of a personality. I would say that the grandfather was probably my favorite character; in dealing with the difficult situation of seeing a ghost and having everyone believe he was crazy, he won over my heart.

Overall: A beautifully written character-driven novel that just didn't quite work for me.