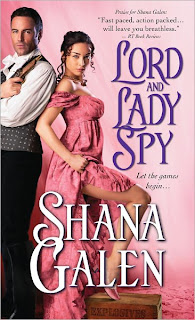 I was so captivated with the concept of this: Mr and Mrs Smith (although I don't like the movie at all) in Regency romance (aka my favorite time period!) that I broke down and actually paid for this book ($0.99 but still)

It opens just as the Napoleonic Wars are winding down and the British spies are disbanding. Both Sophia (Agent Saint) and Adrian (Agent Wolf) are discharged and find themselves at loose ends. They must now return to their placid lives as Lord and Lady Smythe. Separately each wishes for a baby and a real relationship with their spouse; each has practiced fidelity despite opportunities to cheat; and each wishes to dive back into the spy game to escape their stifling upper-class lives. But repeated miscarriages have made it hard for Sophia to consider trying for a baby again, especially as Adrian was never there to support her. Both think their spouse is boring and unable to understand them. How quickly things change!

Fairly early on, they learn about the other person's involvement in espionage and this presents them with sorts of new challenges. They are competing against each other to reclaim a spot as a spy but must work together with vastly contrasting styles. Additionally Adrian tends to underestimate the strength and abilities of women, something that Sophia simply must correct for him.

I loved watching these two fall in love; they're stubborn and passionate and perfectly suited for each other. They continually butt heads but they can complement each other and they learn to appreciate the strengths of their spouse and what makes them the perfect team, both as detectives and as mates.

I did think some parts dragged and I wasn't that interested in the mystery other than in seeing how the Smythes learned to work together to inflict some damage on England's enemies.

Overall: A hot romance although I did skim some parts for slowness.