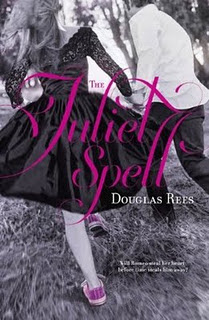 I was not sure what to expect from this book other than some significant Shakespeare references but what I received was a fun book with a plot that cannot be taken too seriously.

All Miranda wants is to be Juliet in her school's production of Romeo and Juliet, to serve as a tribute to her actress mother who never got to be Juliet and to fill her love of theater. To ensure this outcome, Miri casts a spell and is startled to discover Edmund Shakeshaft aka William Shakespeare's brother in her house.

The reason I say this plot cannot be taken too seriously is partly due to the time travel and Edmund's very easy acclimation to modern day standards as well as how easily everyone accepts his presence and how conveniently other events play out. I bought into the story and was willing to allow Rees to guide me along; others may not be able to accept that.

Of course there's a lot of Shakespeare, from Romeo and Juliet and from the plays written after-I bet it would be fun for a Shakespeare nerd to read through this and pick out all the references! The idea is that Shakespeare stole from everyone, especially from the words of his brother and we are getting a preview of how Shakespeare was inspired. However there is also a lot of science (or pseudo-science, I can't tell) revolving around how the Shakespeares are arriving and how that is affecting the past as well. I really appreciated that the time travel had serious consequences even in a book as light-hearted as this one.

There is a lot of drama though; first in the casting of the play and then its actual production as well as in the relationships of the cast. Miranda falls in love at almost first sight with Edmund even though a practically perfect guy from her own time is RIGHT in front of her. He was probably my favorite character although I liked most of them.

The one character I really didn't like was Miranda's dad, who left the family to "find himself." They struggle along with his paycheck contributing to the family's finances but welcome him back with open arms when he finally wakes up and returns. That was probably my biggest issue and I doubted the likelihood of that particular scenario ever happening in real life way more than I doubted the time travel or other issues.

Overall: A fast read that requires some serious suspension of belief but rewards you with a lot of fun!