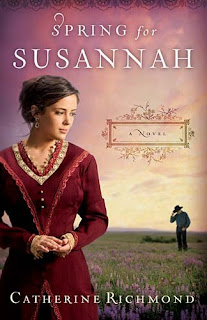 I wasn't sure what to expect with this book as it's another western story, which is not my favorite setting. And while I don't rank this among my favorite books, there was an outstanding aspect of this book.

Namely, the romance. Main character Susannah grew up with warped ideas about gender and marriage as instilled in her by her parents and enduring mean and petty comments from her peers. Consequently, she is shy and embarrassed when she arrives in the Dakota Territory married to a man via proxy. Jesse is practically perfect, prepared to love, honor, and cherish this woman he's never met. Although he is frustrated with her inability to share an opinion, he continues to pray to God that they can build a real marriage.

And over the course of the first book, they do so. As they fell in love, I fell more in love with them. Susannah feels unworthy but Jesse draws out and is proud of her veterinary skills.  They begin to know each other's little likes and dislikes. And she starts to share her opinions, which he is happy to hear even when they disagree. They also suffer hardships together as life on the prairie is difficult with hardly any neighbors.

However the book goes off the rails after a plague of grasshoppers devours their crops. Jesse decides that the only solution is for him to leave Susannah and find work elsewhere to support them. During his futile journey to find work, he gets separated from his companions and ends up the guest of Native Americans during a brutal winter. Meanwhile Susannah ends up fending for herself and missing Jesse terribly. As Jesse is feared dead, many men end up vying for Susannah's hand. I did not like these segments; all I wanted was for them to be reunited and facing challenges together.

Overall: A beautiful romance that is sidetracked by separation, displeasing to this reader.