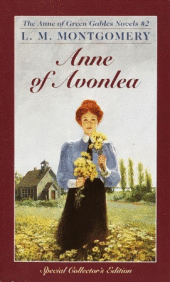 This is the second book in the Anne of Green Gables series as well as the start of my tribute to Anne and LM Montgomery week. Could I have picked a better time than Thanksgiving? Probably but this is when I wanted to do it so whatever.

This book starts with Anne, aged 16 (!) and beginning a two-year stint at the local school as a teacher. I cannot imagine being a teacher at this age (that's how old my sister is and I certainly wouldn't trust her with a schoolroom of impressionable children).  She also faces new challenges with a crabby male bachelor neighbor and taking in a set of twins, sweet Dora and exuberant Davy. Meanwhile Anne still has time to get up to some of her usual crazy adventures and misfires in addition to pondering the bizarre behavior of the handsome Gilbert Blythe and her feelings toward him.

I just want to say that I was very disappointed with the lack of Gilbert in this book. At this point in time, he is teaching in a different place so it makes sense that they wouldn't be able to interact much. However the later books better make that deficiency up to me as I adore Anne and Gilbert and can't wait for them to get together! Gilbert seems aware that they are a great couple but Anne isn't yet decided.

While I loved just about everything about the first book, sometimes Anne's imaginings and descriptions grated on me a bit. I love reading about pretty much every character, the crabby, the gossipy, the sweet, the dull, no matter what they're doing. But sometimes Anne has to describe just exactly how something looks and I don't fully appreciate it. I like action more than description and I was sometimes a bit bored in this book.

Happily there are still some great episodes such as Anne's determination to never beat a student, being sorely tried and Anne's little foray into matchmaking. There are many funny stories and many sweet moments. However I would describe the mood as very upbeat and cheerful rather than sad, which is good because it leaves me smiling and eager for the next book.

Overall: A fine outing with Anne even if it didn't quite serve up what I wanted!