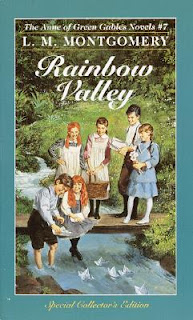 This book is still technically part of the Anne of Green Gables series (packaged all together, this is labelled as the seventh) but it focuses much more on children, who are very like her in sensibility, and their adventures rather than Anne. Thus I feel that this is slightly misrepresented as Anne barely appears and in fact it is the new Presbyterian minister's children who have most of the page time with Anne's kids occasionally showing up as well. They are neighbors and spend a lot of time together in an area named Rainbow Valley by the Blythes.

Like the previous books, these are mostly vignettes alternating focus on the kids and allowing all of them to have a bit of spotlight. While I did like those kids for the most part, as they have good hearts and intentions even if they run wild, I feel a little upset with the publisher for marketing them all together. Surely there were stories about Anne's bunch that could have been told instead! This is compounded by the arrival of a character called Mary Vance, who seems okay at first but then becomes very annoying as she is a bossy know-it-all. It also seemed like she received more page-time than the Blythes and was supposed to be funny.

I also find myself growing a little tired of the necessity of everyone being matched up, of the incessant gossip within their small town, and the little things like that. I do enjoy the children's misadventures still as they always seem able to come up with new stuff. I was also struck by the foreshadowing to a coming war. It is my understanding that this was published in 1919 but is set probably in about 1912-4 or thereabouts and certain passages helped me ponder what would happen in the next (and last) book, which does cover the years of the Great War.

Overall: Definitely my least favorite of the Anne books as it doesn't have much Anne nor does it have a fully cohesive plot.