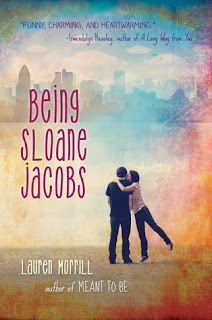 Honestly I was not that into Morrill's debut Meant to Be because while the cover was gorgeous, I found the male love interest unbelievably annoying and the plot pushed situations so far beyond the point of believability. Though I suspected the latter would be the case here, I still had to give it a try because I'm such a sucker for switching places books.

And I was not disappointed! Though many of the events of this book struck me as ridiculously implausible, within the context of this book everything seemed to flow. What we have are two young women sharing the same name and skills in ice-skating who coincidentally meet and spontaneously decide to switch places until circumstances catch up and they have to face the music.

Our first Sloane (Emily) Jacobs is extraordinarily privileged with a senator father, a mother committed to maintaining their picture perfect lifestyle, and an older brother who has laid the groundwork for rebellion. She is attempting to rejoin the world of competitive figure skating after a humiliating failure years earlier and is on her way to train more. Her life is not as perfect as it would seem though and she jumps at the chance to be someone else.

The second Sloane (Devon) Jacobs was raised under more financially straitened circumstances with most of the family's money going toward her alcoholic mother's rehab, enhancing the need for a hockey scholarship that may be difficult to achieve when she can't force herself to take a shot at the goal. She also has anger management problems that get her sent to a hockey camp for the summer allowing her to meet Sloane Emily and for them to switch places.

I don't know much about ice skating but I suspect that there's a lot more to both sports than could be easily learned in the time frame they have. Still I went with the premise that many skills were transferable and I liked the moments of panic each girl had when faced with something she wasn't expecting. In neat moments, the girls encounter parallel experiences, each facing a competitor, falling for a new love interest, and running up against challenges at the same time. These mirrored experiences nicely reflect each other as we alternate between the girls' narration.

Though I didn't anticipate being surprised, I was at how early their charade was discovered and enjoyed seeing them wrap everything up. The consequences for their deceit are rather minor in my opinion but I was so charmed by the basic plot and getting to read about their ice skating abilities and travails that I can overlook that.

Overall I would recommend this book to fans of movies like "The Parent Trap" and "The Cutting Edge" as it seems to owe a bit of a debt to both while still bringing its own modern edge and twist.